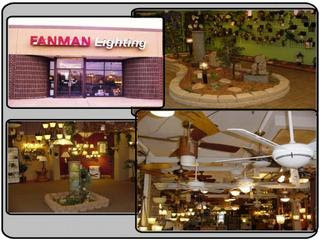 I started working for a small family owned business called Fan Man Inc. in February of 1989. I have absolutely loved it ever since. In 1998 Fan Man went from a ceiling fan store, to a full blown lighting showroom. In 2005 the company expanded to join the booming housing market. This was about the time the market fell apart. After struggling for a few years, they had to sell the company, and offered managers to purchase their stores. We took them up on that offer.

My partner, Jack Metcalf, was managing the store with me at the end. Jack has had a few former lives: he started as an air traffic controller with the Air Force. As a Lieutenant in Vietnam he was awarded the "Bronze Star" medal for services during the air war. He then went on to work as an air-traffic controller in Minneapolis Center and became the spokesman when Reagan fired them all in the eighties. After air-traffic he decided to use his business degree from the U of M, and went into the lighting industry with Thompson Lighting and Budget Power stores as a buyer and manager for 18yrs. he was hired by Fan Man in 2001 to help them grow into the lighting showroom we have now.

Jack and myself have a true passion for the lighting and ceiling fan industry. You'll be hard pressed to find anyone that is more helpful and knowledgeable than ourselves and our staff. We actually love what we do for living and it shows.